Today was a day of two halves…

I’ve been wondering if it would be possible to improve the quality of the Dungeon Walls, cheaply, by turning on tessellation and using a height map. The short answer is, yes, kinda, but not in a way I can ship with. There’re shadowing issues, some seams, and from the angles my camera looks at the walls, the quality isn’t actually that great.

I tried with high poly walls, but they’re still not that good either, so I swapped out the tessellation for a parallax occlusion mapping and that looked… shit. So, that bright idea didn’t pan out. I might revisit tessellation for floors, as the camera angle should be more forgiving.

Another thing on the TODO list: Integrate the new DLSS plugin from Nvidia. Turned out to be a simple drop-in and the results were astounding. At the highest perf setting it more than doubled my framerate. The really expensive area with all the volumetric fog in now does 120fps at 4k and the only visual differences I can see are slightly less pronounced Depth Of Field, and a barely perceptible flicker on the particles emitted from the Wand.

I can’t think of any update that’s given me a performance increase like that. Apart from ripping out obviously broken code. Game changer…

And since I was making builds, I fixed up a bunch of Niagara warnings that I noticed in the logs.

My aim is to push something up to Steam at the end of the week.

Made a death explosion for small NPCs and setup the Rat and Wasp to use it. Maybe not great on its own, but it sits nicely with audio.

Hopping skulls no longer disappear when hit! Sorted out the delay to allow the VFX to play out and added in the destructible mesh from the thrown version.

Spent the majority of the day putting audio on the NPCs. Added lots of creaks and grinds to the skeleton’s locomotion, which helps, but it probably needs some barks / moans as well. Although I guess skeletons are mute…

The rats came out really well, though. I love the little patter their feet make. Just about audible if you have headphones on.

Updated the dialog text with a load of little changes, fixed a bug where all destructible meshes were playing broken pot samples, and added a global override in the GameInstance to force all instances of AI using my UI system to log to screen and file. I’m bored of going through them individually to turn them on / off.

Added a similar override to the RoomController, so I can go room by room…

Imported some Niagara Dissolution effects that I’d bought off the Marketplace. That takes the count of “other people’s stuff” that I’m using up to two: Fluid Ninja, and now this: https://www.unrealengine.com/marketplace/en-US/product/dissolution-examples

The effect looks like it’ll do exactly what I want, and I have some quite big plans. For now, I just want the skeleton to turn to dust. First attempt came out quite nicely:

Had to decide how to communicate damage to the AIActions – some things clearly shouldn’t run when they’ve just been punched in the face – and opted to put a new delegate into the NPC_Base class, which individual actions can bind to. Worked well, to the point where I might end up doing this for a few other things. Once I decide if it should stay in the NPC or move to the AI Controller… Hmmm.

Added a generic action to pause, when hit. If I had any hit reaction montages, this would give them time to play out.

I think that’s enough on the NPCs for a while. And I’m getting itchy to do something else…

Pushed a build up to Steam.

Was gonna do a Vlog on how I implemented the vines, but it’s not that interesting and I’m only doing it to whore for clicks on the YT channel, so sod it, I’ll skip this month…

New job: fixing the blockout of the 3rd map location, “Waters of Sul”.

I did the original blockout for this section of the map over a year ago -- shown in this vlog, https://youtu.be/z_ojweZBNzc -- and I’ve always felt that it was a little too large. 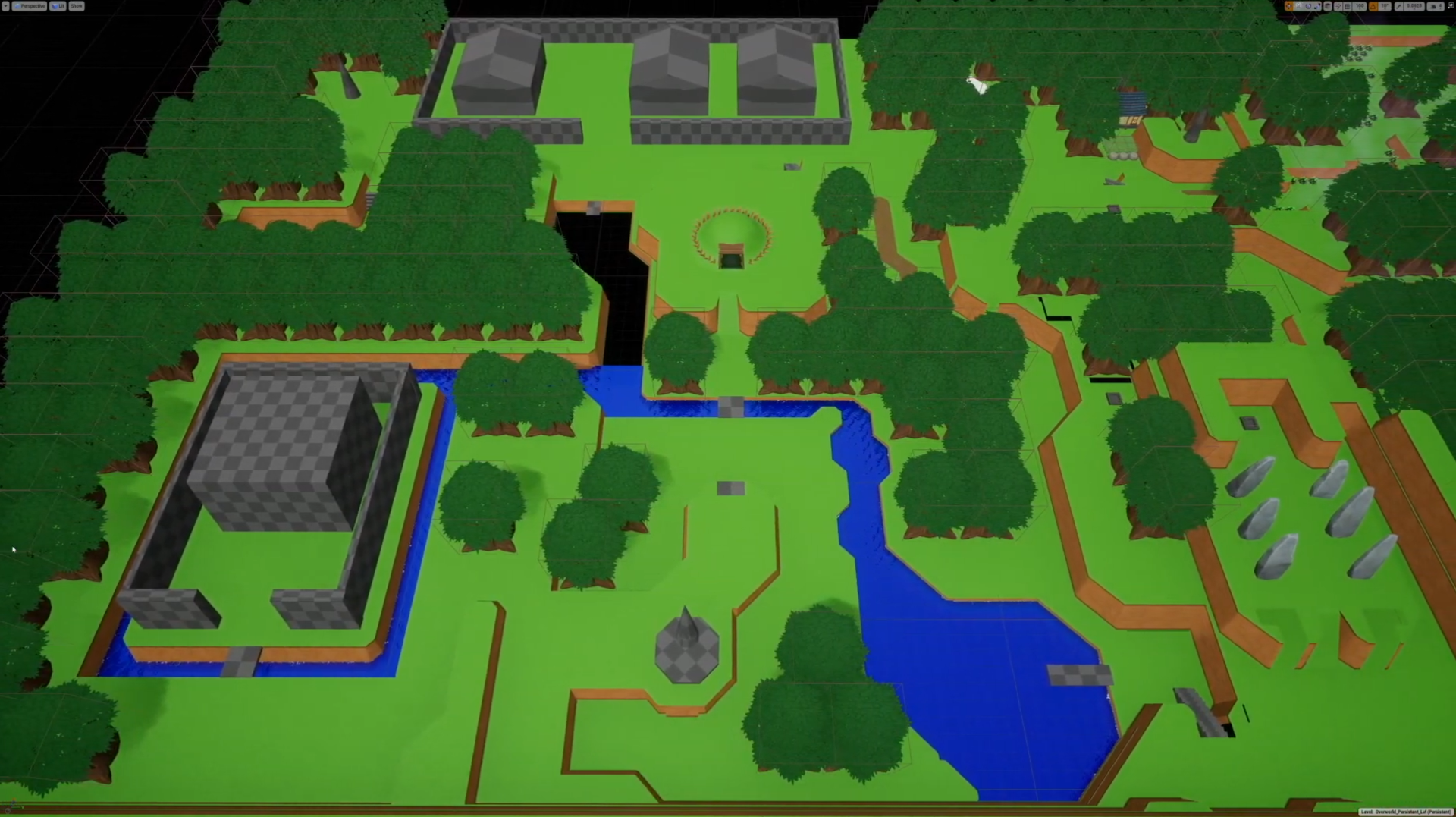 Link to the Past has quite a lot of empty space in its map, when you go back to it, but Link Between Worlds is quite compact. I think the latter is a better fit for this game (and modern audiences) so I’ve reduced the map area by a third, and done a different layout that reduces the number of possible paths. Getting lost is going to be a problem for certain people, and big open spaces don’t help, so, I’ve binned them. 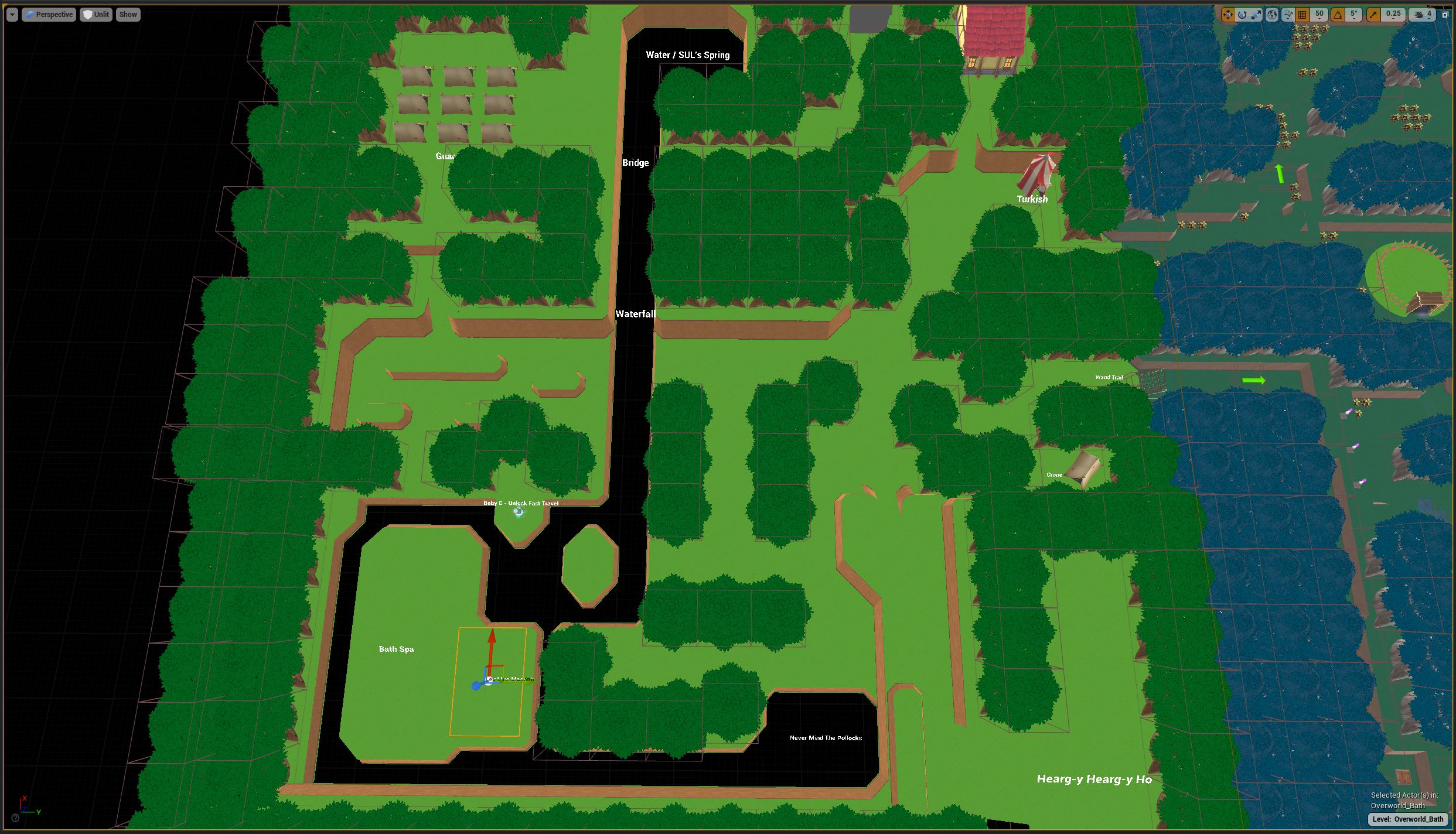 There’s not much in the way of combat on this map, it’s pretty much all quest related, but I’m thinking of splitting the main dungeon in two – one in each of the bottom corners – but I’m not quite sure how to communicate that just yet. Or if it’ll work…