I had a few bits and bobs to do for the accountant this morning, which was fortunate, as I'd not really decided what I wanted to tackle on the art-front. I finally decided to make the materials for Fisherman's Friend, one of the early quest NPCs.

I only have male characters atm, and I've not got around to making props like hair, glasses etc. so they all look alike. I'm going to lean into it in some locations, with running jokes about the guards all looking alike. Because they do, they're identical... The peds will become a bit more varied over time.

As it's Monday I started off simply and modelled a picture frame -- very Link Between Worlds -- and a bunch of splotchy paintings for the Pollocks. Yup, leave no bad joke behind...

The rest of the day was spent in Niagara making some stylised wind VFX. Complete tart, but I love that stuff. Unfortunately, they're not as clean as I hoped, they quite often flicker and the material I wanted to use (Radial Gradient) doesn't work at all in the editor. Not been able to get to the bottom of it, so I've gone with a pretty basic material for now and I'll touch them up if I ever work out what's causing the glitch.

I've put off animating any of the NPCs, but today's the day...

My initial idea is to trigger an AnimMontage, in the same way as the player character, via an extended AnimInstance class. When the ABR responds to button input, it can also request an animation be played. Code-wise, it ended up being super-trivial: I derive a new AnimInstance, populate an array of references to AnimMontages, and then let the ABR know of the derived class. The Animation graph has all the information for movement and/or idle anims, and my function triggers the montages to play over the top. The montages themselves decide if they loop or if they return to idle and I can tweak the blend times in montages to make it smooth.

This ended up working so well that I can delete all the custom ABRs I've been making. Was worth cogitating on for so long...

The rest of the day was spent rattling through some animations and setting them up in-game. I also added another debug option for timelines.

Did a lot of the animations for Fisherman's Friend. They're not super high-quality, but good enough. Looking at the NPCs in Link Between Worlds, they're not exactly doing a lot either, so at least I'm close to my inspiration. :D

I've ended up playing through the game's timeline a fair few times today, and I'm definitely not happy with the pacing of those quests that get you into the main dungeon. They're too compressed, and there's too much back-tracking. The "Never Mind the Pollocks" quest was meant for another map location, so I've decided to move it back there. This meant some dialog re-writes, and re-writing two instances of the Crone and Fisherman's friend.

I've come up with something else for FF to do in the top pond. He'd still re-direct you toward Derek to get the Fishing Rod but it'll be an optional quest. We'll see how that plays out, cos you're really going to want the Rod in this game. Having it optional could be risky... Anyway, that plan needs coding, so I'll do it later.

While I was in there, I decided to start deleting some of those ABR classes that I discovered I no longer needed...

Right, time to start on some baddies. I've not really got a plan for them, other than being heavily inspired by (wanting to steal) the common Zelda ones -- blob, baris, bats, flying tiles and rats immediately spring to mind -- oh, and I want to sculpt as many of them as I can. I can't really afford to pay other people to do this stuff forever so I need to bite the bullet, dive in and see what I can get away with. (Fingers crossed)

After I procrastinate a little more... by spending the morning resurrecting the Wasp from Lumo!

I had the diffuse, normals, gloss etc, split into separate files for Unity, so I put the whole thing into Substance and did a few tweaks. Tinted the legs and body a smidge, added some emissive to the eyes and sting. It's basically the same, just a little brighter in the scene. I also rigged it, which reminded me; I hate the weight painting in Blender. Gngng.

Paul's wasp will no doubt be the best looking baddie in the game. I'm on my own now...

Tbh, I've still not worked out the best way to go from ZBrush to something usable in-game. I've not got a handle on a good retopologising work-flow. I know I can do it manually in Blender, but it takes ages, and I really don't have the patience for it so what I normally do is build a low-poly model in Blender first, sculpt over that, and then tweak it (if I have to) before the bake.

I've been swotting around, and as far as I can tell this whole thing is a bit like UVing: there's an art to it, and it's boring as hell. Anyway, I'd started sculpting a spider a while back and never got around to finishing the textures for it. Since it was lying around, I thought I'd try a different tack and use ZRemesher to get down to something reasonably low, directly in ZBrush.

Faffed around for a few hours and got something sorta clean at 20k polys. I exported that into Blender and deleted a load of loops by hand and the final thing ended up at 3k. On the high-side, but good enough for a quick experiment. Next time I'll pay more attention to what I'm doing when I'm removing loops... 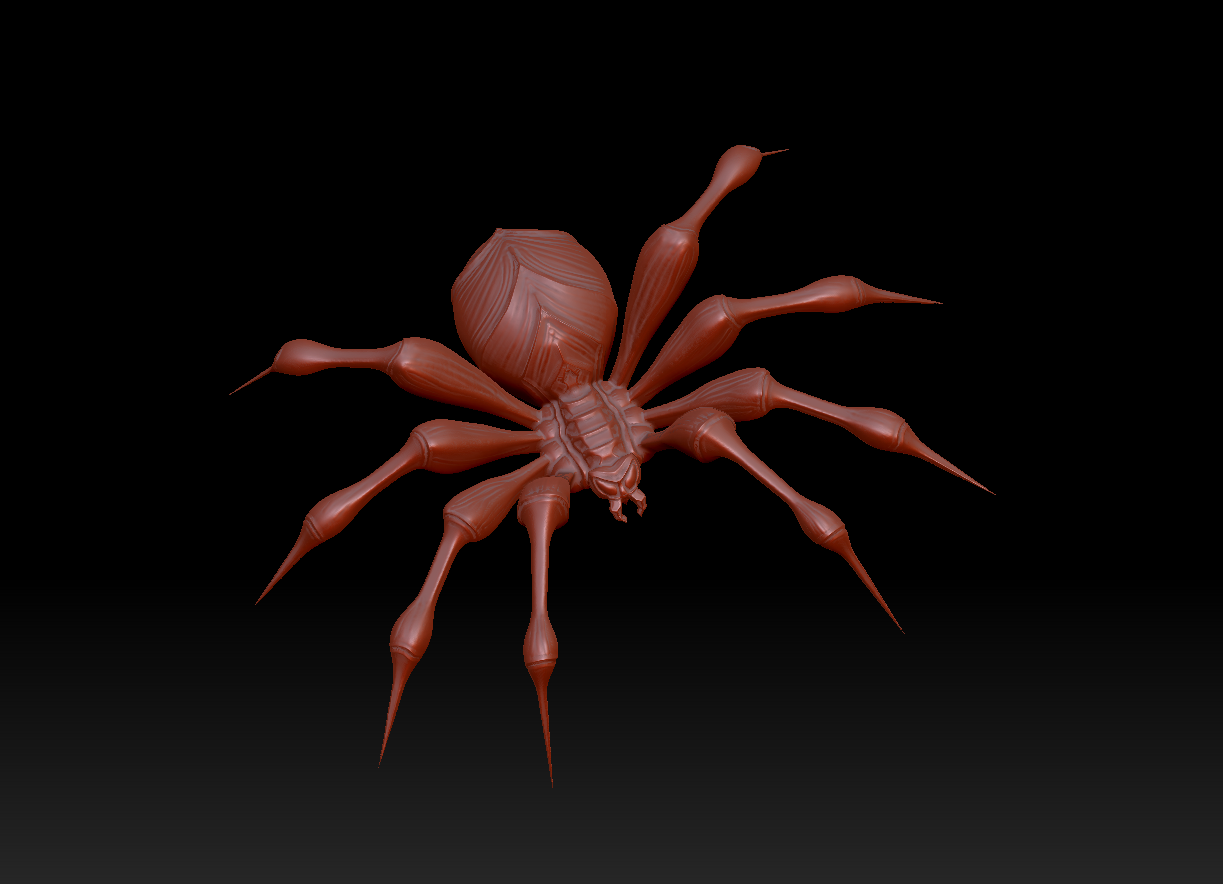 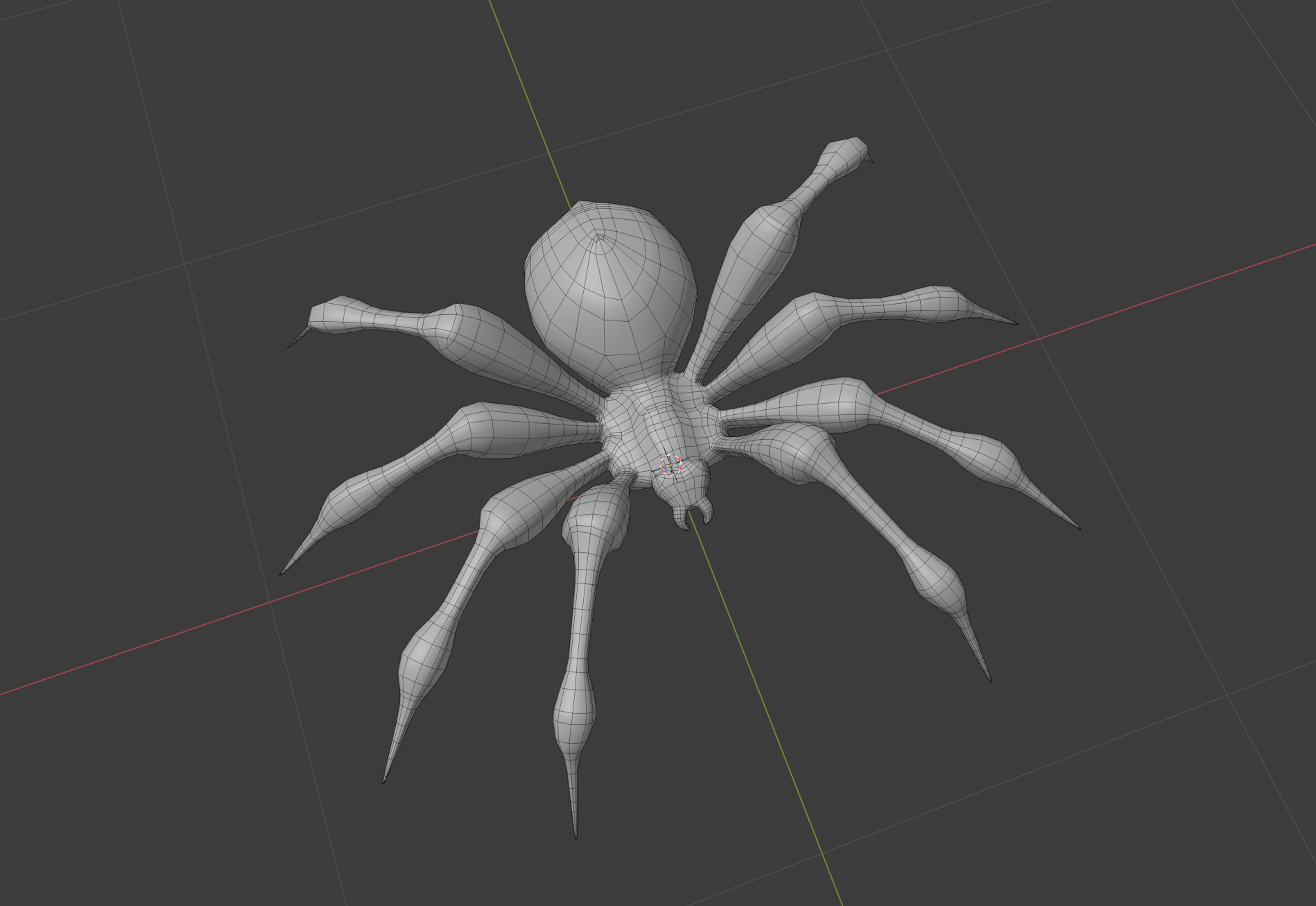 Will have a pop at redoing the texture, tomorrow. Still have loads to learn about Substance Painter...

Spent the day in Substance painter doing the texture for the spider. It came out ok, in the end, although I'll go back and sort out the colours a bit later. I need the spider to pop when in the woods, but I've not sorted the grass and leaf colours in there yet, it's just using a really quick and dirty colour grade in a post-process volume... 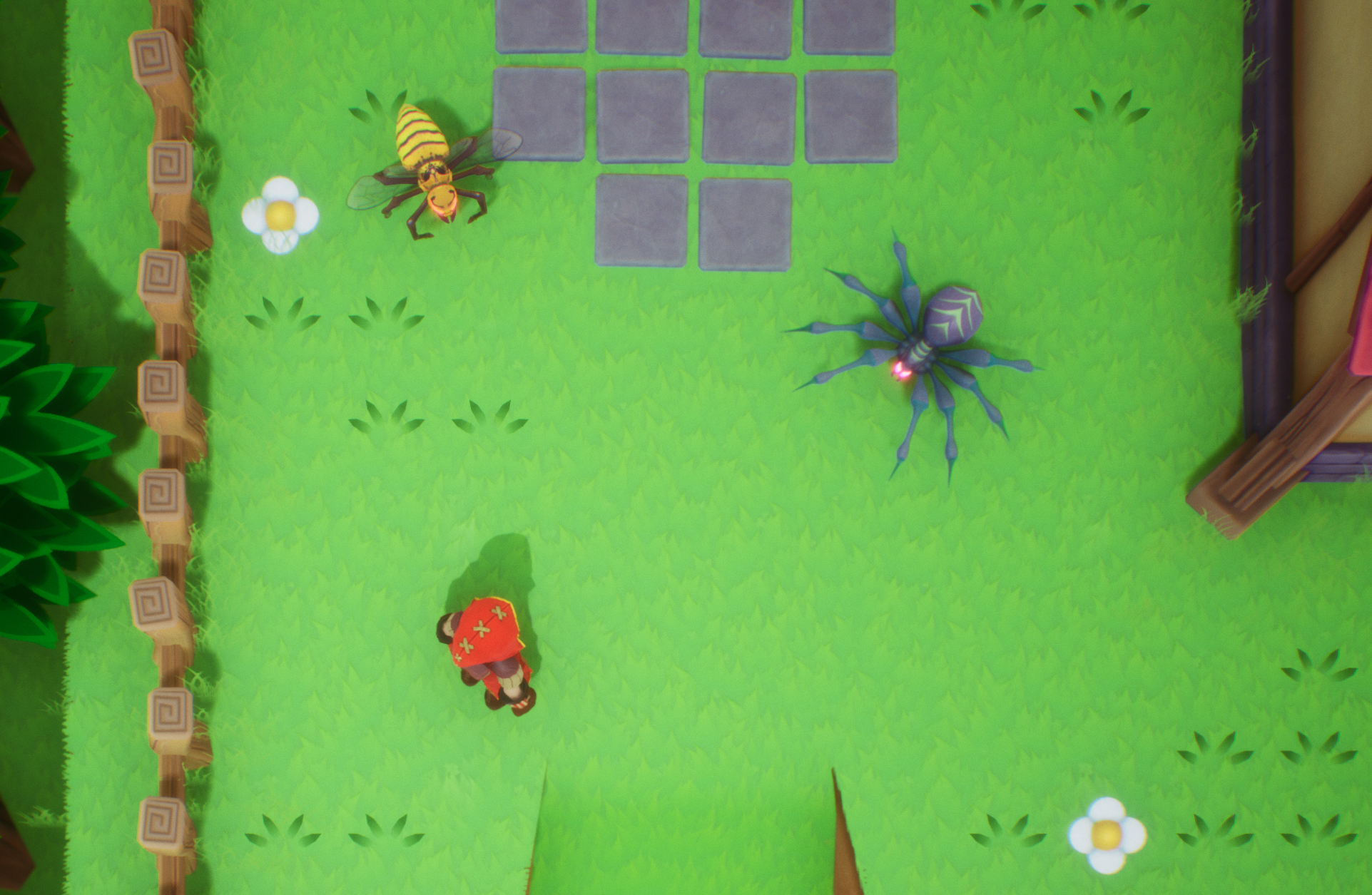